From a remote tropical paradise to hot springs and mountain ranges, these national parks will go down in the history books for their unique characteristics, their beauty and their impact on the National Park System. Read on to learn more.

Signed into law by President Ulysses S. Grant in 1872, Yellowstone’s 2.2 million acres of wilderness spanning Wyoming, Montana and Idaho was the first national park in America. Situated around the Yellowstone Caldera and an entire network of geothermal activity, including hot springs, mud pots and geysers, it’s most famous for Old Faithful. Named for the yellow hue of its earthen canyons, the park includes the Yellowstone River and four mountain ranges with an ecosystem that supports over 60 mammal species from gray wolves to grizzly bears, lynx, bison and elk.

While a handful of areas were named national parks after Yellowstone was established, they were later decommissioned. In 1890, Sequoia National Park, protecting California’s Giant Forest, was established and is the second oldest national park today. Home to some of the world’s largest trees, the General Sherman is the largest in the park at 275 feet tall and 25 feet wide. It’s also home to Mount Whitney, the tallest mountain in the contiguous United States, found within the Sierra Nevada range. Just a few days after Sequoia National Park’s designation, Yosemite National Park, also located in California, was added to the list, making it the third oldest National Park. Famous for its granite cliffs and formations, including Half Dome and El Capitan, Yosemite is also home to North America’s tallest waterfall. Its boundaries include a pristine wilderness along the Sierra Nevada with three giant sequoia groves home to an abundance of rare plants and animal species.

On the flip side of that coin, Pinnacles National Park is the newest addition to the national park system having been established in 2013. It’s the ninth national park found in the state of California, breaking the tie with Alaska for the most national parks. Named for its massive black and gold monoliths, the result of erosion from an extinct volcano, the park is popular amongst rock climbers and hikers. It’s also habitat for the endangered California condor, prominent for having the longest wingspan of any bird species. Arkansas’ Hot Springs National Park was designated as a Federal Reserve way back in 1832. That’s 40 years before Yellowstone’s national park status, so one could argue that it’s actually the oldest. However, it didn’t receive its designation by the National Park Service until 1921. It’s also significant for being the smallest national park at just over 5,500 acres and the only national park in an urban area. The park is centered on the natural hot springs that flow out of the Ouachita Mountains.

Alaska’s Wrangell-Saint Elias National Park is the largest park in the system at over 8.3 million acres. It protects the convergence of the Alaska, Chugash and Wrangell-Saint Elias Mountain Ranges. More than a quarter of the park is covered in glaciers; among them is the famous tidal Hubbard Glacier.

Gates of the Arctic National Park

With just over 12,500 visitors in 2014, Alaska’s Gates of the Arctic National Park received the fewest visitors of any national park in America. This is partially due to its remote location as the country’s northernmost park. It’s also one of the largest at over 7.5 million acres. It protects an expanse of pure wilderness in the Brooks Range and does not have parks facilities. A visit here is for the truly intrepid. 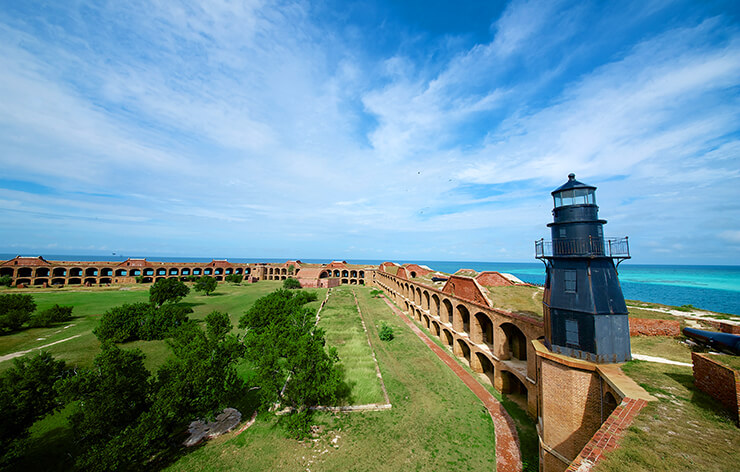 Located in the Gulf of Mexico 70 miles west of Key West, the Dry Tortugas National Park is a remote tropical paradise. Stretches of sandy beach, aquamarine waters and lush greenery make this national park a visually stunning haven for beach goers, photographers and nature lovers alike. But it is the purpose of the Dry Tortugas that makes it one for the history books. The string of seven islands were discovered by Ponce de Leon in 1513 and named for the many sea turtles who called the surrounding waters home. After the War of 1812, it was decided that the Dry Tortugas would be used to provide protection to the southern border of the United States. Fort Jefferson began development in 1846 and, although never completed, had a vital partnership with warships who patrolled the surround waters. Offering a place to resupply and seek refuge from storms, Fort Jefferson proved useful. It was further employed during the Civil War as a base for soldiers and a place to house prisoners. Amongst the most infamously caged criminals was Dr. Samuel Mudd, who harbored the assassin John Wilkes Booth after he shot President Lincoln. A visit to this remote natural wonder is a breathtaking and educational experience.