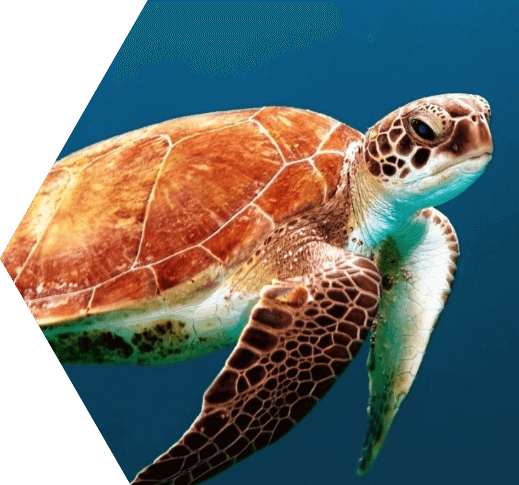 Turtles are everywhere in and around the Dry Tortugas National Park. Named “Las Tortugas” by Ponce de Leon in 1513, this scattering of small sand and coral islands approximately 70 miles west of Key West, Florida, are famous for the abundance of sea turtles that annually nest on them. Some say that sea turtles are today’s only living relics of the prehistoric past. Loggerhead, Hawksbill, and Green turtles sometimes are seen floating in the sea on the trip between Key West and the Dry Tortugas National Park. The Dry Tortugas National Park is the most active turtle nesting site in the Florida Keys. Park Service biologists have been monitoring sea turtle nesting activity within park boundaries since 1980. They survey the park’s seven islands daily throughout the nesting season and document the presence of turtle tracks or “crawl.” When researchers find a specially-shaped mound of sand on the beach, they know it is a nest. Each nest is marked and recorded. Forty-five days later the nest is checked for signs of hatchlings. Three days later, researchers evacuate the nest, release the trapped hatchlings, and record the number of eggs. Over 2,330 Loggerhead and Green turtle crawls have occurred during the last four seasons on only three miles of beach!

The Green Turtle population in the Caribbean basin before the Industrial Revolution was around 660,000,000. Today, the population is only in the ten’s of thousands. (Lepidochelys kempi)
Smallest of the sea turtles. Adults do not exceed 30 inches in shell length and range in weight from 80-100 pounds. The broadly oval shaped shell is usually olive gray, but young are black. Found in the coastal waters and bays of the Gulf of Mexico and Atlantic where they forage predominantly on crabs. Only a few hundred females nest in the state of Tamaulipas, Mexico each year. ESA Status: ENDANGERED (Caretta caretta)
A large reddish-brown sea turtle with a disproportionately large head. Adults range in size from 33-40 inches shell length and weigh 150-400 pounds. This is the most common sea turtle encountered in the southeastern United States. Frequently observed around wrecks, underwater structure, and reefs where it forages on a variety of crabs, jellyfish, and mollusks. ESA Status: THREATENED (Chelonia mydas)
For hundreds of years Green turtles have provided fresh meat for mariners, pirates, and peoples living in the Florida Keys, Cuba, and all around the Gulf Coast. At one time turtling was a big business for Key Westers, with a cannery brewing popular green turtle soup that was shipped out to northern cities.

A medium to large brownish sea turtle with a radiating or mottled pattern of markings on the shell. The head is small in comparison to other sea turtles and the biting edge of the lower jaw is serrated. Adult shell lengths range in size from 36-43 inches and weights average 200-300 pounds. Primarily a tropical herbivorous species, the juveniles frequently occur in Florida waters, especially in areas abundant in sea grasses. ESA Status: ENDANGERED for Florida and east Pacific breeding populations; THREATENED everywhere else. (Dermochelys coriacea)
The largest sea turtle. Can attain a shell length of six feet and weights of 1,400 pounds. Black with white blotches, the shell lacks scales and is covered by a firm, rubbery skin with seven longitudinal ridges or keels. A highly migratory turtle that nests in the tropics and ranges as far north as Canada and the northern Pacific. Feeds primarily on jellyfish. ESA Status: ENDANGERED