Living At Fort Jefferson Then and Now Escape From the Worst Prison in the U.S.

Your application for clemency has been denied.” This message signed by President Andrew Johnson in 1868 was a terrible blow for George St. Leger Grenfel, former Confederate colonel and now prisoner in the Union prison camp at Fort Jefferson. Since 1817 the dashing, talented English-born Grenfel had been a soldier-of-fortune. At age 17 he fought in the African deserts. He eradicated pirates in Morocco. He served in Italian hero Garibaldi’s legion in South America.

In 1854 he fought in the Crimean War. Three years later in India he helped put down the Sepoy Rebellion. Along came the American Civil War and Grenfel, over 60, responded. He ran the Union blockade, and convinced Confederate officials to let him join General Morgan’s famed Raiders. In 1862, he worked with a young cavalry officer, Captain Thomas Hines, and the two became fast friends.

In 1863, after a strenuous year of training troops and raiding, Grenfel stayed in camp while Morgan’s raiders went on their 24-day pillage of Southern Indiana and Ohio. Morgan’s men were captured after a long chase, imprisoned, then dug their way to freedom. Hines and Grenfel began organizing a major military uprising known as the Northwest Conspiracy. Hines worked his way into Canada. Grenfel slipped behind Union lines and joined Hines and the other plotters. The conspiracy planned to free thousands of Confederate soldiers held in Northern prison camps. Grenfel’s assignment was to collect information for a raid on Camp Douglas near Chicago. However, word of the plot leaked and Grenfel was captured along with other conspirators. He was tried and sentenced to hang. The sentence later was commuted to life imprisonment at Fort Jefferson.

Grenfel arrived at Fort Jefferson on a scorching June day in 1866 in chains, a 30-pound iron ball chained to one ankle. Prison life was brutal; heavy work, heat, and bad food took their toll on the 66-year-old prisoner. He was beaten and kicked, even at times bound and tossed into the sea. For more than two years Grenfel and his English family, along with his American lawyer, did everything possible to get him released legally.

Then came the flat denial from Washington. Grenfel decided to risk all and escape. The facts are confused. But in the stormy night of March 7, 1868, Grenfel and his cellmate, John Adare, either were let out of their cell by a friendly guard or slid down a rope outside the fort wall. The friendly guard and the two prisoners ran to a small fishing boat, found two more prisoners there, and all five men shoved off in a howling downpour. Neither the escapees nor the fishing boat was ever seen again. Though one version of the event has it that George St. Leger Grenfel was spotted weeks later in Cuba.

Existence was Miserable at the Fort

Heat, humidity, dull food, insufficient and tainted water, boredom, despair, and sickness often made life miserable for the wartime inhabitants of Fort Jefferson — members of the Union army and navy officers and troops; the work force of engineers, laborers, and slaves; and the prisoners, military and civil. Imagine trying to build a massive fort on a small island without fresh water, with no fresh food except what can be caught, and little shelter from the elements. The nearest town, Key West, is 70 miles away. Farther to the south is Cuba. Even farther to the west-north-west is New Orleans.

It is wartime; the nation is divided between the Union, the northern states, and the Confederacy, the southern states. In the South, Garden Key, home of the fort, and Key West are under Union control. All supplies must be brought in by boat including fresh food, construction material, and personnel. Some of it comes by way of Key West, some from New Orleans. Most of it is shipped from those far-away East Coast ports under Union control. Deliveries are unreliable; they are affected by the usual wartime disruptions, shortages, enemy harassment, and the vagaries of weather.

Originally, the engineers planned to collect rainwater from fort and building roofs and store it in cisterns.That failed when the cisterns cracked and sea water contaminated the fresh water. Two steam condensers were brought in to convert salt water to fresh. But these failed to provide adequate supplies. Rations caused constant complaints. A few live hogs and cows were kept at the fort. Barreled meats, sacked vegetables and fruits, along with plenty of packaged and canned foodstuffs were brought in regularly by boat from Key West. The fort also boasted a large bakery that was kept busy. Nevertheless grousing continued.

In 1863 hundreds of soldiers, laborers, and prisoners filled the fort. The summer was unusually hot and an epidemic of scurvy broke out. Limes and fresh vegetables were needed to control the disease, and money was scarce. Dr. J. B. Holder, stationed at the fort, organized a theater club and raised the cash.

The dreaded yellow fever invaded Fort Jefferson in August, 1867. It was brought by Captain George W. Crabbe from Havana, Cuba. Unknowingly, he had carried on his person or in luggage several Tiger mosquitoes that quickly multiplied into millions of virus carriers.

By late September the epidemic reached its peak. Of the approximately 400 people then at the fort, 275 were seriously infected. Of these, 38 had died, including two prisoners, the Post Surgeon, and four hospital nurses. Dr. Samuel Mudd had been fighting the scourge since September 6 when he was released from confinement. Dr. Daniel Whitehurst joined Mudd on September 7 when the latter returned from Key West. Both doctors performed heroic work and survived. They were credited with containing that particular epidemic which ended with the last case reported. 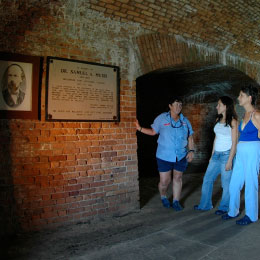 Much has been written about the hardships that faced soldiers and prisoners at Fort Jefferson during the Civil War, loneliness, boredom, heat, mosquitoes, no fresh water and the list goes on. It is not much different at the fort today. In summer the sun still beats down. It is so quiet that there is still a lonely, yet wonderfully peaceful, feeling to the place. There are still a few mosquitoes. And except for the rain there’s still no natural fresh water to be found anywhere on the seven small islands.

Dry Tortugas National Park, with its huge masonry fort that sits on Garden Key, is the most remote of all the national parks of the contiguous 48 states. Positioned some 70 miles west of Key West, the seven small islets at the end of the Florida Reef stand alone in the Gulf of Mexico, truly the farthest outpost of the state of Florida.

You won’t find a grocery or drug store on Garden Key, where Fort Jefferson is located. There is no place to buy a hammer, a pair of shoes, or even such mundane items as toothpaste or toilet paper. Everything has to be brought in. That includes gasoline for the park’s six boats, drinking water, all foodstuffs, medicines, and maintenance supplies. Seven generators supply electricity, and if one breaks down, parts have to come by boat or pontoon aircraft from Key West. Movies are non-existent, as are bowling alleys, restaurants, and most kinds of recreation. The staff of ten is on its own for entertainment, so compatibility is important.

Supplies are brought in once a week by the supply ship Activa. If the staff runs out of anything between trips, it’s just too bad. Storing food or other supplies is difficult because there is no room in the leaky living quarters. The fort is crumbling and the mortar holding together the 16 million bricks is in disrepair, giving rainwater free entry.

The U. S. Congress and the state of Florida have appropriated hundreds of thousands of dollars to repair the fort. Bricks need replacing. How to get them there? By floating them in on barges. Repairs also need to be made to the septic system, the cisterns for collecting rainwater, and the heating plant.

Restoration means shipping in workmen and all their supplies, as well as providing temporary housing for the workmen. Yet the Dry Tortugas and Fort Jefferson have, in recent years, changed from the lonely, remote outpost of the last century into a popular tourist attraction. Boatloads and planeloads of vacationers, historians, and birdwatchers looking for rare avian species arrive each day to tour the historic fort. Even Queen Elizabeth II of Great Britain was a visitor several years ago.

Lonely? You bet it’s lonely. Lonely and peaceful in the evenings and early mornings, when there are only campers outside the fort’s walls. Lonely on the parade grounds even during the day as many visitors seem more interested in the beach and the snorkeling. The Dry Tortugas and Fort Jefferson, even in this modern era of planes and fast boats, is still a lonely, faraway, and peaceful place