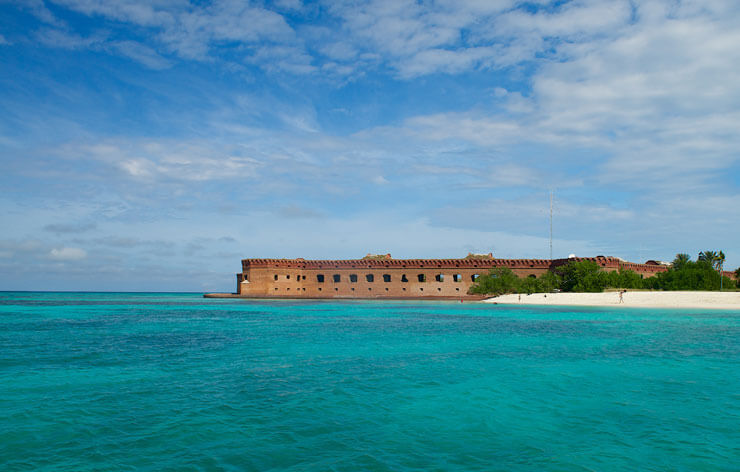 KEY WEST, Fla. — I met Tortugas Jack early one morning at quayside near where the spearminty waters of the Gulf of Mexico swirl into the Atlantic’s darker blue, a bit like the mixing of liqueurs in one of those tropical drinks on Duval Street, Key West’s flashy main drag.

But there was nothing of tiny paper umbrellas about Jack. Wildly bearded and built like a rum barrel, he wore a wrinkled cotton hat with a leather strap that would hold it on in a hurricane. Around the edges poked scraggles of gray hair above clear blue eyes.

I hoisted my knapsack, ready to ship out with him for a remote smattering of sand-and-coral islands that have a long history as a home to buccaneers, masked boobies, yellow-fever victims and an infamous assassin’s co-conspirators.

Tortugas Jack, aka Jack Hackett, a former Chicago saloonkeeper and self-professed “poet sailor,” was my guide for the day. Me and 99 others, aboard the high-speed catamaran Yankee Freedom, bound for a day of exploration, bird-watching (those boobies) and snorkeling. We were headed for the seven-island archipelago of Dry Tortugas National Park, 68 miles southwest of Key West. The site of America’s largest 19th-century coastal fort — a well-preserved 16-million-brick structure complete with an honest-to-God moat — the Dry Tortugas were the most exotic of my finds in a week of off-highway adventures at the far end of Florida.

A fort the size of Safeco Field? On a pirate island that nobody north of Pensacola has ever heard of?

You couldn’t keep me away.

In this subtropical far corner of the United States, to which Seattleites can fly for about $200 less than a ticket to Hawaii, this was a treasure I’d found buried in the back of a guide book.

“Alex Trebek calls it America’s most remote national park,” announced Hackett as our boat churned out past channel markers and the white-railed balconies of Key West’s waterfront inns.

The three-hour boat ride gave me time to enjoy a catered breakfast, chat with a gaggle of Fort Lauderdale widows who shared my table, and read up on the oddball history of the Dry Tortugas (“tor-TOO-guz”).

The islands originated about 8,000 years ago when rising sea levels deposited coral rubble and sediments on an ancient coral reef— “The Turtles” — for their population of sea turtles, which still nest there April to October.

Treasure fleets in their day sailed past the Tortugas on the voyage to Spain, and the islets became a pirate nest as well. The likes of English freebooter John Hawkins anchored there to lay in stores of fish, birds and eggs. Mariners added the label “Dry” to nautical charts to warn of the Tortugas’ lack of fresh water.

Speeding westward in the sun, we saw just how little there is between Key West and anything. The largest island of the Tortugas is only a mile long by a half-mile wide. For more than 300 years, not much happened there besides prolific breeding by turtles and seabirds. Then in 1845, Florida became a state and the Tortugas became a military reservation.

Within a year, the U.S. was at war with Mexico, the future of Cuba and Latin America was in question, and construction began on Fort Jefferson.

A dark line on the horizon soon took shape into an odd vision in a watery world: a mammoth structure of red brick. Some walls dropped straight into the azure sea, and others were edged by white sand and palm trees. A black lighthouse towered near a tall white pole where an American flag snapped in the breeze.

As we drew closer, the decorative scalloping atop the fort, the drawbridge, the moat, and the riot of color with varicolored brick surrounded by every hue of green and blue was a sight suited to Disney. But we were far from Orlando. At first an outpost from which to protect shipping between the Mississippi River and East Coast, Fort Jefferson later was a Union stronghold in the Civil War blockade of the Confederacy.

From a small wharf, our choices included walking the seawall that formed the moat (.6 mile encircling the fort), snorkeling, or exploring the fort, solo or in a tour.

I joined the tour, waiting with others by the drawbridge. Above us soared a seemingly permanent squadron of magnificent frigatebirds, their distinctive chevron-shaped wings spanning 71⁄2 feet. They rode ocean winds for hours without a flap.

Hackett began the tour by answering a question on everyone’s mind: Why on earth did they need a moat around a fort surrounded by ocean?

Answer: What was important was the outer seawall, acting as a buffer between battering waves and the fort’s foundation. It also prevented enemies from bringing boats in to where invaders could scale the fort’s walls.

We crossed the drawbridge and spent an hour exploring shadowy gunrooms, climbing echoing circular staircases and stepping carefully atop high walls. The view on one side was of the fort’s lush parade ground, now dotted with palms and buttonwoods. On the other side, a scarf of white sand and coral-studded water.

‘Gibraltar of the Gulf’

Along the way, Hackett continued the fort’s strange story.

Despite a monumental effort over almost 30 years to build what was nicknamed “the Gibraltar of the Gulf” on 12 acres of 16-acre Garden Key, parts of the fort were never completed. It never fired a shot in battle, and new brick-piercing cannons rendered it obsolete while still under construction.

After years of struggle with water shortages, a yellow-fever outbreak that killed 38 people, and a pummeling hurricane, the military abandoned Fort Jefferson in 1874.

While home to hundreds of soldiers in its day, the fort was best known as a Civil War-era prison, mostly for POWs and Union deserters. Its most famous prisoner was Dr. Samuel A. Mudd. The Maryland physician was sentenced to life at hard labor for setting the leg that John Wilkes Booth broke in a leap from a Ford’s Theater balcony after shooting President Abraham Lincoln in 1865.

At the remote prison, Mudd and three others convicted of complicity with Booth were well out of reach of Southern sympathizers who might want to help them escape, making at least one good use of this white elephant in the middle of a dreamy blue sea.

In the end, though, Mudd was a savior. When the fort’s doctor died of yellow fever, Mudd stepped in to minister to the sick. After four years, Lincoln’s successor, Andrew Johnson, pardoned Mudd.

For soldiers, Tortugas life was plagued by smothering summer heat, a tedious diet of fish and more fish, and boredom that gnawed like a toothache. According to a soldier’s diary, “at times a group of us would steal over to Loggerhead Key for strong drink and to shout at the stars.”

But no moat diving

While the fort draws history lovers, pristine water and untouched habitat draw divers, birders and turtle watchers. Happily, snorkel gear came with the boat ride; all the way down the Keys I’d heard that Dry Tortugas snorkeling was Florida’s best.

Not in the moat, though. That was just a rumor. While the moat was off-limits, snorkeling outside the walls was something special.

“The water out here is healthier,” Hackett told me on the ride out as we passed Marquesas Keys, the northernmost atoll in the world, in fishing waters favored by Ernest Hemingway.

“The sponges and sea grasses keep the water cleaner — sponges are natural filters — plus you’re far away from the pollution of man,” said Hackett, who sailed his vintage Alden sloop down here from the Great Lakes in 1979 and never left. “I never cease to enjoy the coloration, the blues and hues and gradations.”

We had an hour to snorkel around the fort. In warm water no more than 5 feet deep, I scissored my legs slowly and followed the sea wall, its underwater bricks crusted with coral, a playground for darting fish in neon stripes. A purple sea fan as big as a banana leaf waved in the ocean surge, and as I passed, a spiny brittle star tucked spidery legs under a pile of fallen brick. Where the sea had punched a deep hole in the wall, a 30-pound grouper lurked like a mugger in a dark doorway.

Other wildlife prospers in the Tortugas. Endangered green sea turtles and threatened loggerhead turtles, up to 4 feet long, bury clutches of more than 100 eggs on its beaches each spring when they arrive from wintering grounds near Spain. Sea turtles, like salmon, imprint on their birthplace and return to breed.

Once numbering in the many millions across the Caribbean, green turtles were decimated by commercial soup-canning operations in the Keys that continued well into the 20th century.

National Park biologists have monitored sea-turtle nesting within the park since 1980, marking the specially shaped mounds of sand on the beach. With the Tortugas as a refuge, there’s hope: Biologists recorded more than 2,300 turtle “crawls” in four recent nesting seasons on only three miles of beach.

On a major north-south flyway, the islands are also a destination for bird-watchers, a reputation dating to an 1832 visit by John James Audubon. From March to September, some 100,000 sooty terns nest on Bush Key, where females lay single eggs in simple depressions in the warm sand. Among more than 200 species found here, others often seen include brown noddies, masked and brown boobies, roseate terns, double-crested cormorants, and brown pelicans, in addition to magnificent frigatebirds.

For wildlife lovers, it’s the stuff of poetry. Before we boarded the boat for the obligatory trip back to the rest of the world, Tortugas Jack recited his own haiku about frigatebirds:

It invoked the peace and solitude of the place. In fact, it could have been written by a bored Fort Jefferson soldier, snoozing under a palm tree. Maybe all worn out from shouting at those stars.