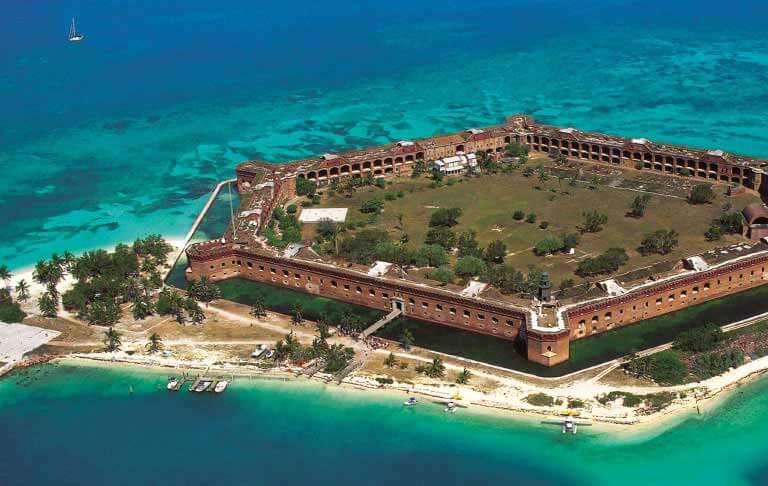 The sun casts a soft glow on a crisp clear morning in Key West’s Historic Seaport as I board the Yankee Freedom, the ferry to Dry Tortugas National Park, a collection of seven remote islands 70 miles to the west. A suntanned Deb Hess, our biologist guide, happily announces it a “chamber-of-commerce day” with calm seas and temperatures in the high 70s, adding with caution that the ocean passage, Rebecca Channel, could get choppy.

I nab a bowl of cereal and coffee at the continental breakfast in the main cabin and settle into a comfy booth next to Daniel, a 30-something outdoors type from Orlando. Being a much heartier stock than I, he tells me that he’s camping on the island for three days. “I feel sorry for you that you only get to spend one day there,” he quips.

As we set off on our 2 1/2-hour journey, Hess begins a historic narrative, and when we pass the Marquesas Keys, site of the 1622 sinking of the Spanish ship Atocha, she ominously notes that it will be the last land until our destination. Upstairs in the wheel room, I visit with Capt. Cory Gauron, who’s holding court, smoothly steering the 110-foot Gladding-Hearns vessel at 26 knots while explaining navigation and lobster-trap buoys with an old salt’s sense of humor.

I wander back down to the refreshing breeze on the bow, where the occasional shout of “dolphin” goes up in a “thar she blows!” rally, and I take pictures of Uri and Alena, a young, windswept Russian couple, as they pose a la Titanic by the railing.

Soon Fort Jefferson on Garden Key begins to take shape, like an ocean mirage on an endless vista of turquoise water. Once docked, I eagerly head to the south beach to snorkel, stopping short at the stunning sight of clear, lazy waves lapping the bright-white sand below the towering 45-foot red brick walls – America’s largest 19th-century coastal fort.

Imagine my delight when I have my first-ever sighting of not one but a dozen live queen conch, an orange striped flatworm and purple squid. I swim with silver porgies, their black false eyes winking, and float by yellow angelfish, blue-headed wrasse and three spiny black sea urchins hiding in a coral head.

A small school of yellowtail snapper leads me to the pilings of a 100-year-old coaling dock and into a magical glittering sphere, where thousands of 2-inch silversides move together in elegant curves and loops like a choreographed dance troupe.

Next, I set my sights on a variety of corals – brain, golf ball and mustard hill – mushrooming from the rusted X-shaped supports. Nearby, purple sea fans and brown finger coral, branching like petals from a long stem, catch my eye. Large game fish – mangrove snapper, Bermuda chub and barracuda – linger in the shade below, while a grand pelican floats on the surface above, all waiting for an easy lunch.

My rumbling stomach signals my lunchtime as well, and as I walk back, I meet my Russian friends along the way. They are delightedly watching a slow-moving conch cross the interior of the moat. Alena looks up at me with the wide eyes of a child and asks, “But what is it?”

After a quick picnic, Hess leads the group into the fort’s grassy parade grounds, shaded by ancient gnarled buttonwood trees. Drawing on her 11 years of experience, she explains the need in the 1800s to protect this vital shipping channel that connects the Gulf of Mexico, the western Caribbean Sea and the Atlantic Ocean.

We pass ruined barracks and a looming black iron lighthouse before entering the architectural splendor of 300 arches that form the outer walls. With a haunted feeling, I note the grooves in the floors from soldiers long gone as we pass rusted cannons and crumbling windows. The chapel ceiling bears the hand-carved mark of the master bricklayer: “JNONOLAN 1859.”

We gingerly climb a dark spiral staircase to the open-air top and find the fort’s largest cannons, weighing 25 tons apiece, still readied for the enemy attack. I’m lingering as close to the disintegrating edge as I dare, admiring the sweeping 360-degree views, when I spot Daniel, shirtless and smiling, paddling his yellow kayak toward neighboring Bush Key. A flock of pelicans flies by as hundreds of frigate birds, with wingspans reaching 7 feet, circle above. I wave goodbye to Daniel with a pang of regret, even though I know he won’t see me. He was right; one day just isn’t enough.